In the first half of the 20th century, smoking in the U.S. (and the West in general) was a sign of a certain social level. If a man really wanted to look manly and seductive woman, a cigarette was a necessary part of the image.

Cigarettes advertised as a companion in all areas of life, in every moment, from a successful career to romantic moments. 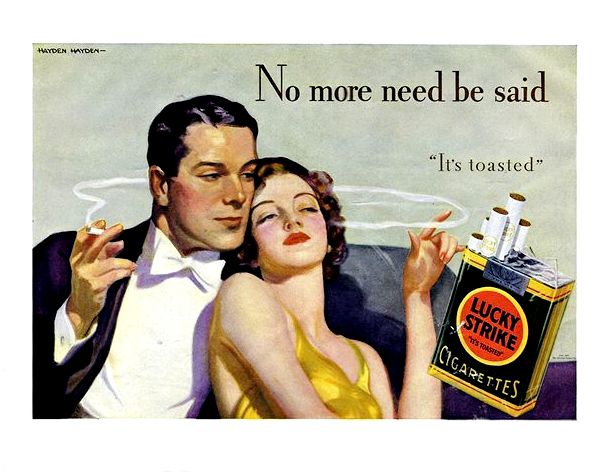 Now U.S. lawyers have successfully otsuzhivalis tobacco monopolies millions in compensation for lung cancer in their clients. Reason for mass claims is simple: the system does not leave the choice «to smoke or not to smoke» tobacco advertising and lied at every turn. Entire generations have been fooled by this information war.

The cynicism of American tobacco advertising does not know any limits: Smoking is promoted as an element ofhealthy, athletic lifestyle!

Do you want to lose weight and be seductive-Smoking! 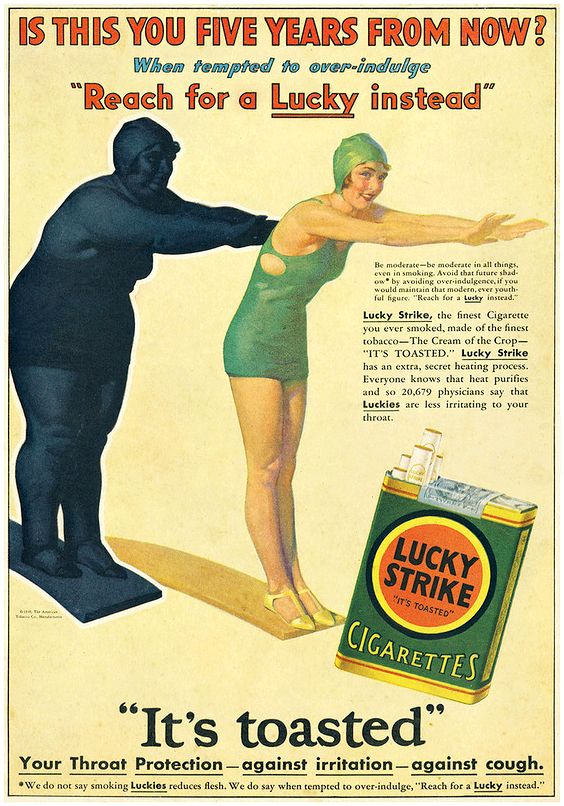 In the 20th century smoking became fashionable and prestigious, it was promoted by advertising and the first movie.

In the late 19th — early 20th century due to the emancipation of women smoked masse.

Fashionable image free glamorous beauty in a short dress without a corset, leading a bohemian lifestyle, very well with the cigarette.

Tobacco producers persuaded-toasted tobacco does not irritate the throat and respiratory tract: 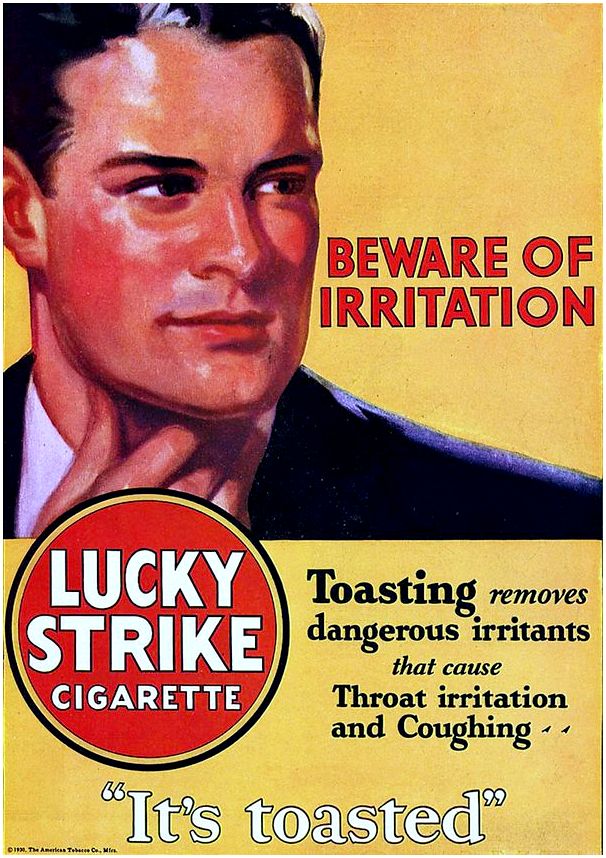 These arguments are very common in advertising.

Cigarettes instead of diet!

Promotional pictures clearly showed the difference between the young, slender silhouettes of smokers and fat, bloated and non-sports: 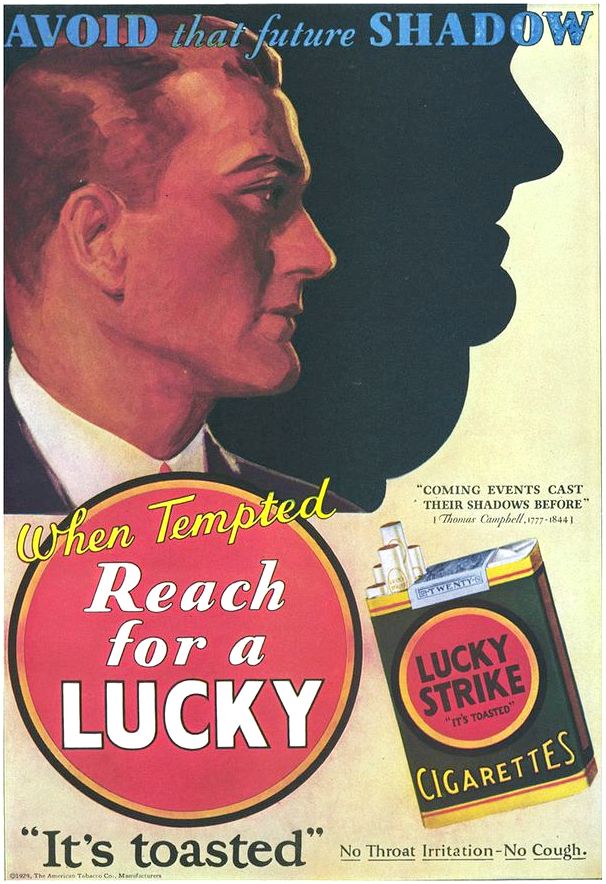 Another in the series of American Tobacco Company’s bizarre ads promoting Lucky Strike cigarettes as a diet aid. This ad appeared in the January 1930 issue of Sunset magazine. 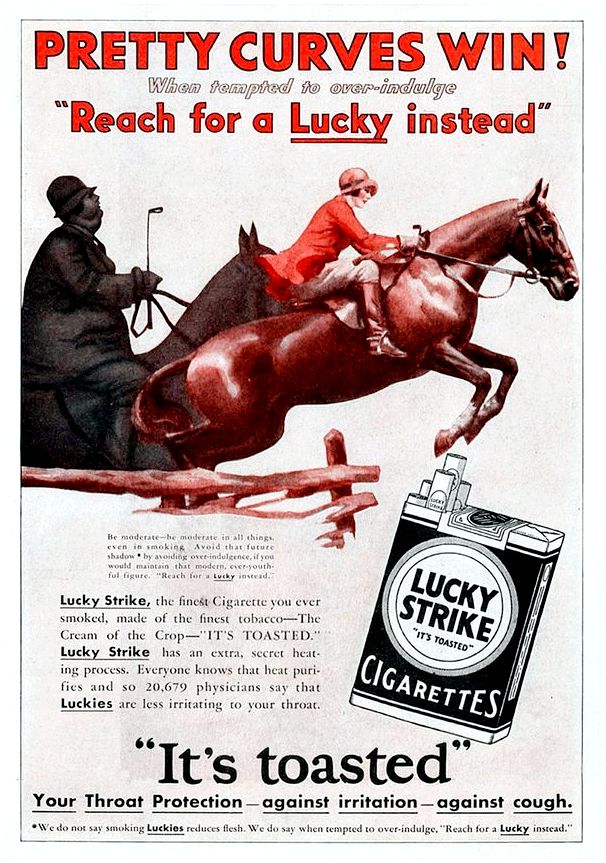 Lucky Strike takes a flying leap with their helpful hints for keeping your girlish figure. After all, pretty curves win! 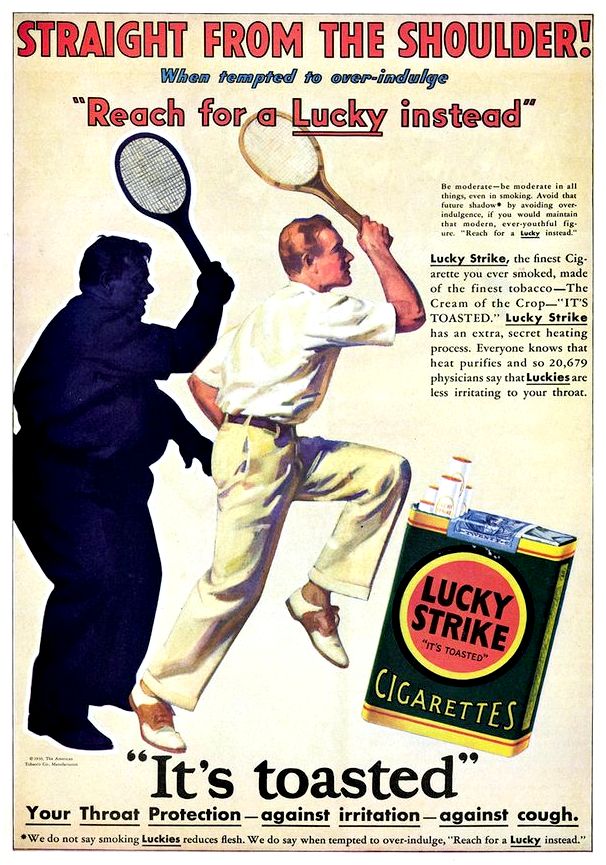 In yet another in the bizarre series of Lucky Strike diet recommendations, this ad from 1930 warns you not to indulge in overeating. But smoke all the cigarettes you want.

I think the big guy in the back has had enough, and is about to whack that guy good. 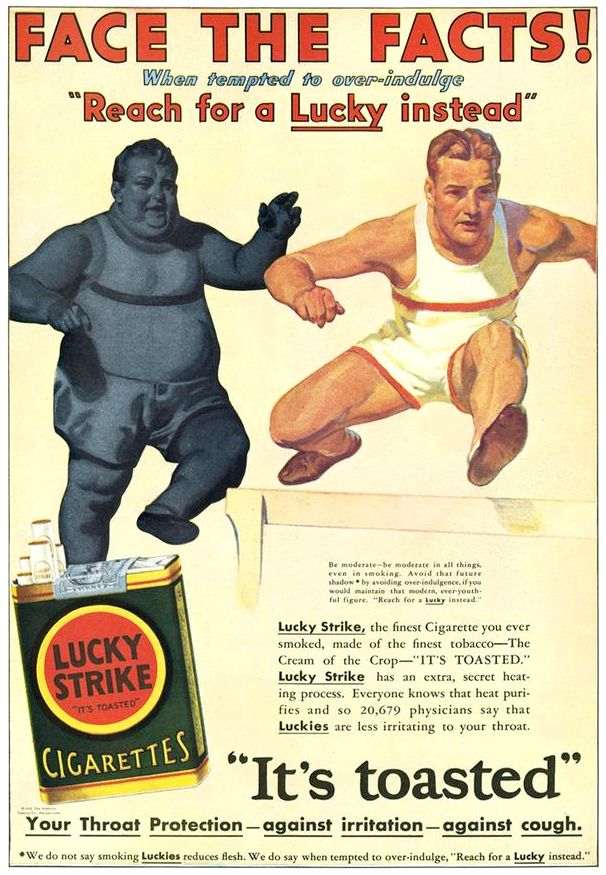 Run! He’s gaining on you!

This disturbing Lucky Strike ad is from 1931. After being reprimanded by the FTC for making claims that their cigarettes caused weight loss, Lucky Strike changed their ads to specify that you were supposed to smoke * instead * of eating, to keep from gaining weight.

In this ad from 1930, the helpful folks at Lucky Strike warn you of your certain fate if you don’t put down that donut and pick up a Lucky instead. 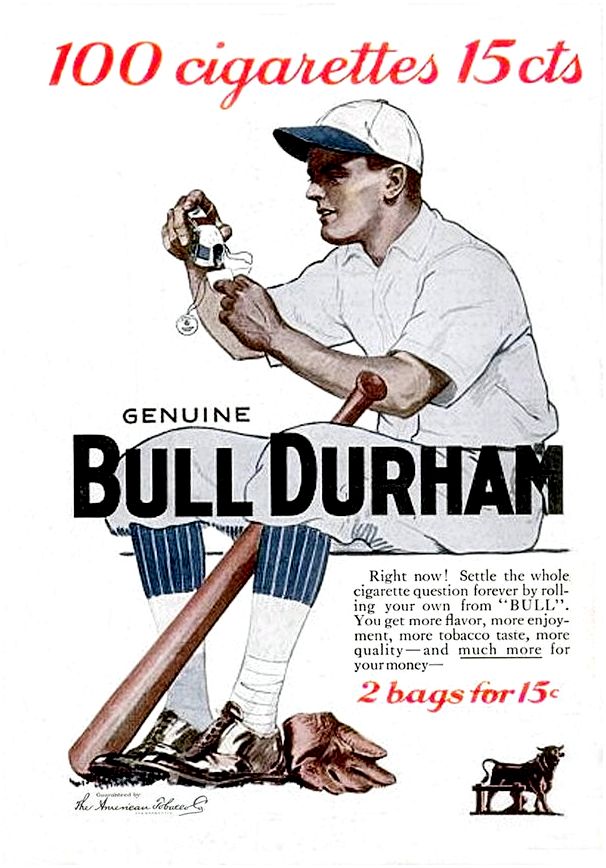 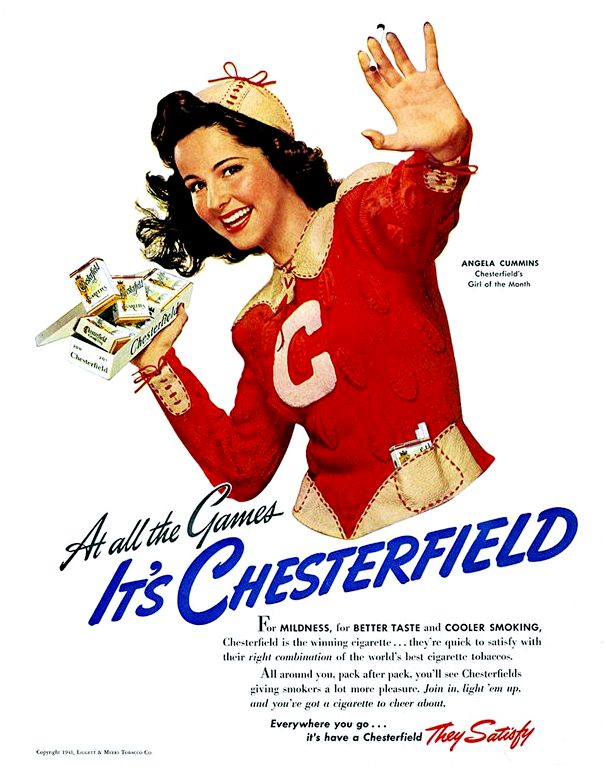 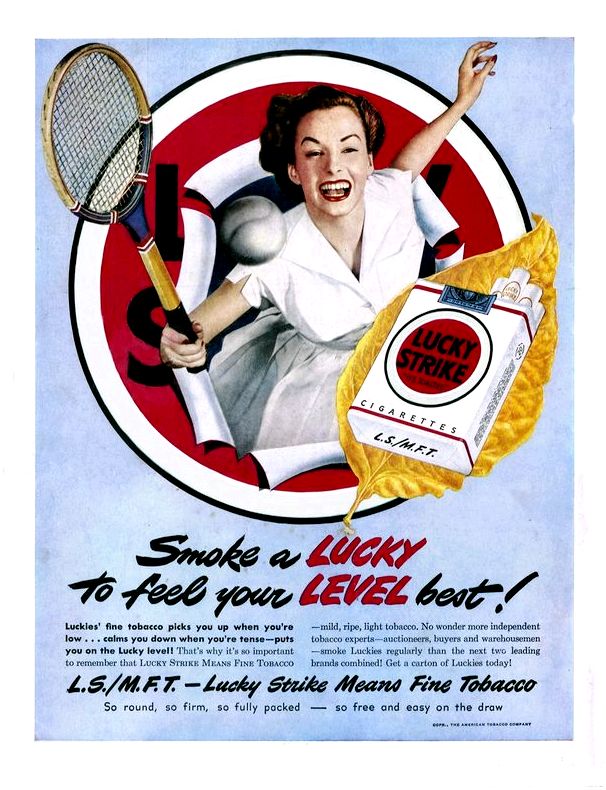 LS / MFT! Lucky Strike cigarette advertisement from the May 16, 1949 issue of Life magazine. 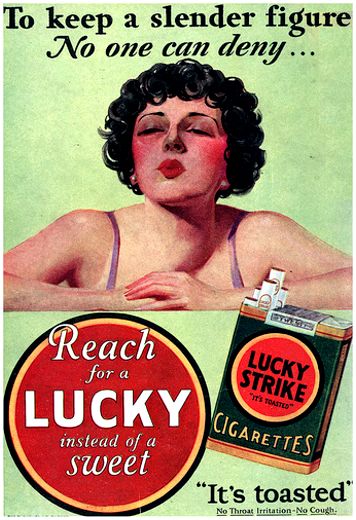 In the 20 years has drastically changed the image of women in vogue thin girls with no forms.

Reduces the amount to half a pack a day, add one to size, at least.

Beauty with a cigarette looker Men: 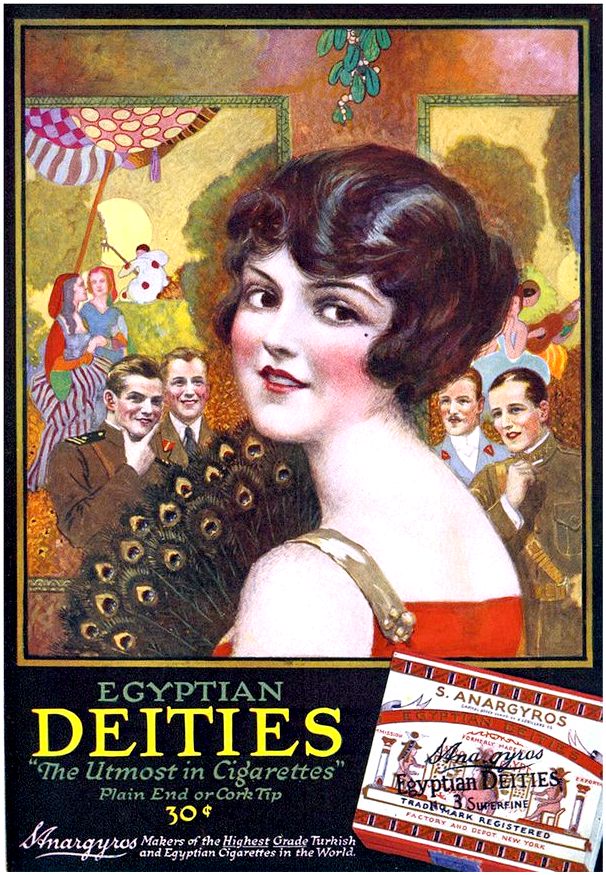 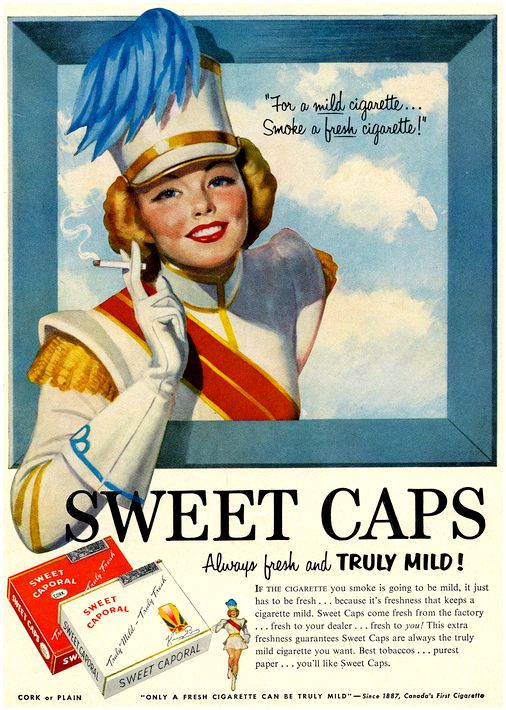 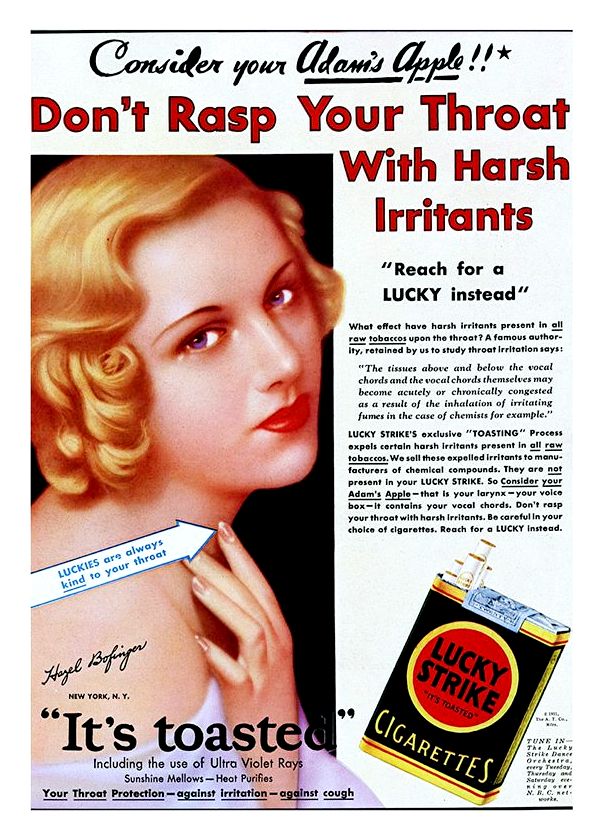 Hazel Bofinger implores you to please «Consider your Adam’s apple!!» In this Lucky Strike advertisement from 1931.

Don’t rasp your throat with harsh irritants. Rasp it with a Lucky Strike instead!

A cigarette is a reliable companion and guide you everywhere: at work and at play! 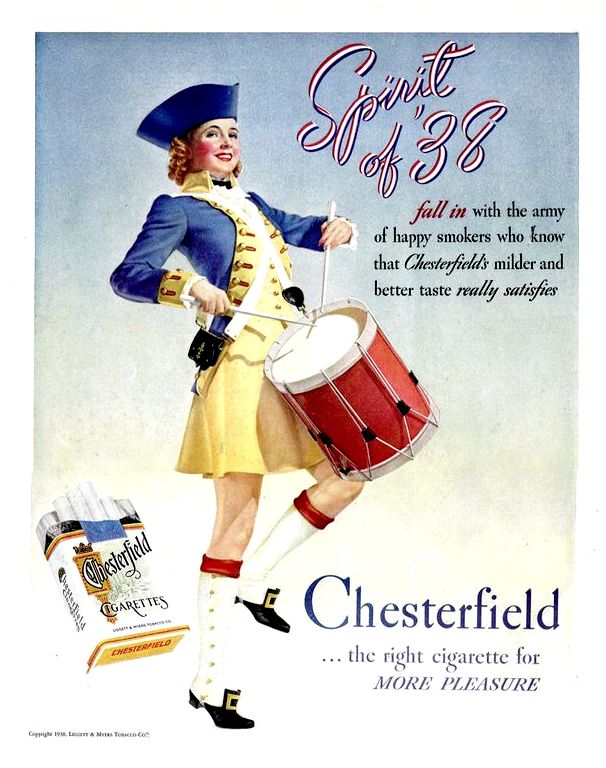 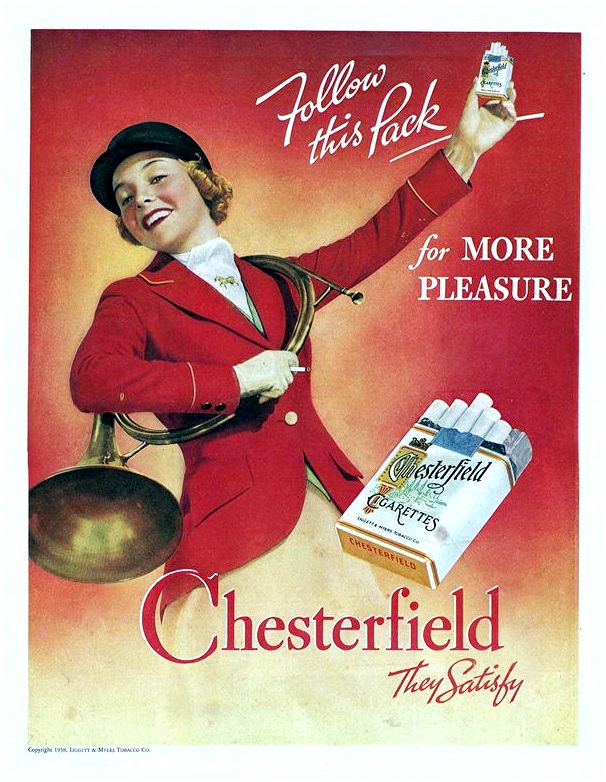 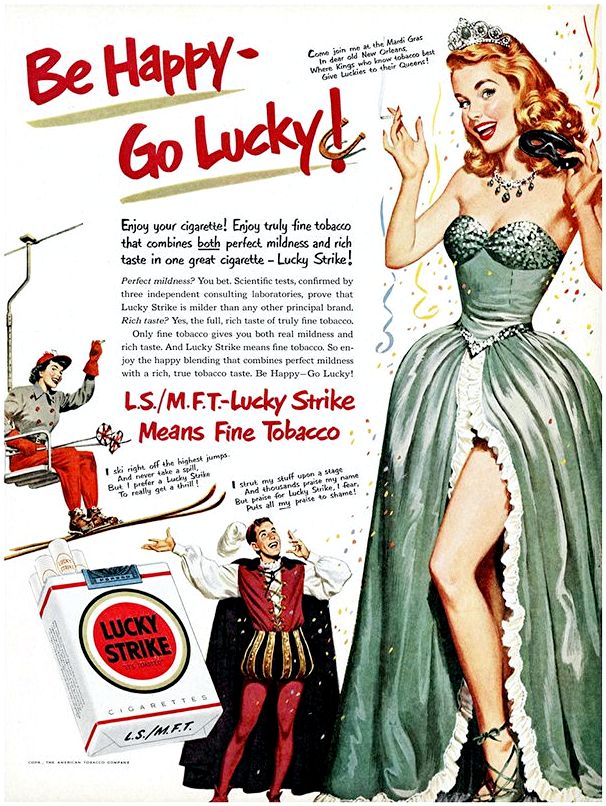 Published in the August 5, 1951 issue of Life magazine 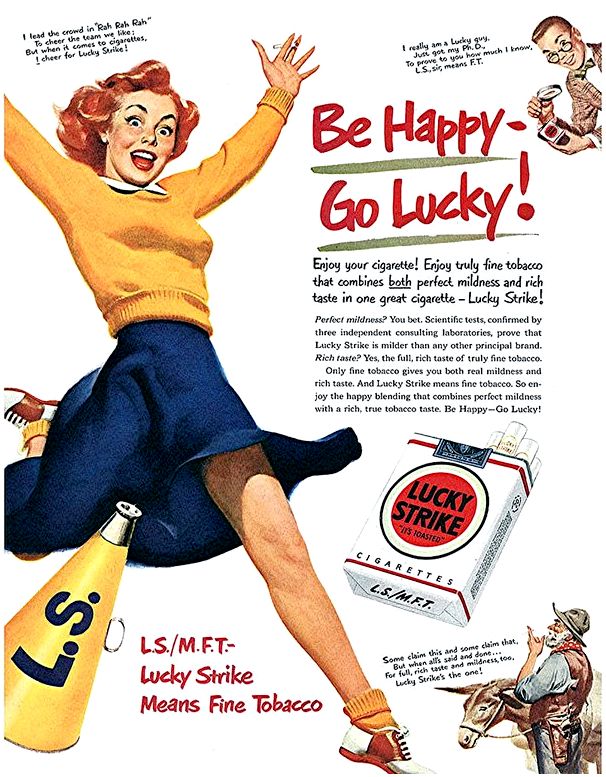 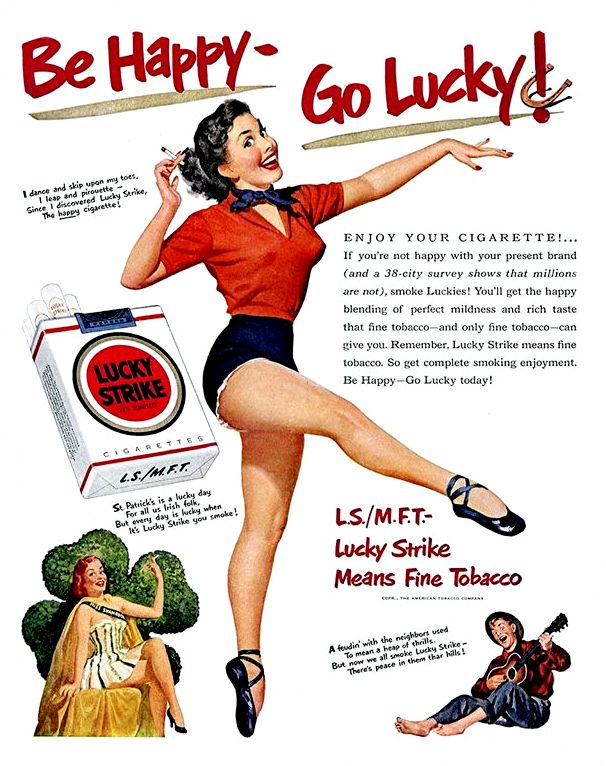 Miss Shamrock, feudin ‘hillbillies, and dancing. What more could you want from a cigarette? LSMFT 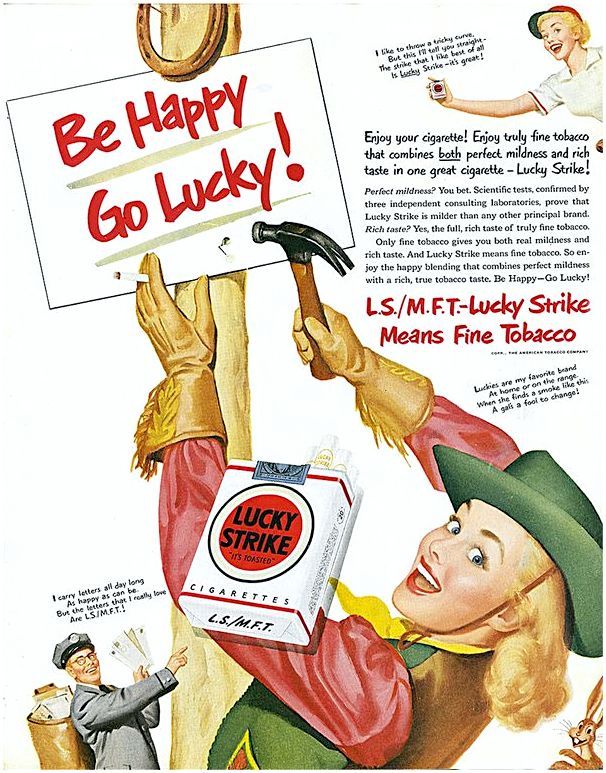 What’s the deal with that rabbit? 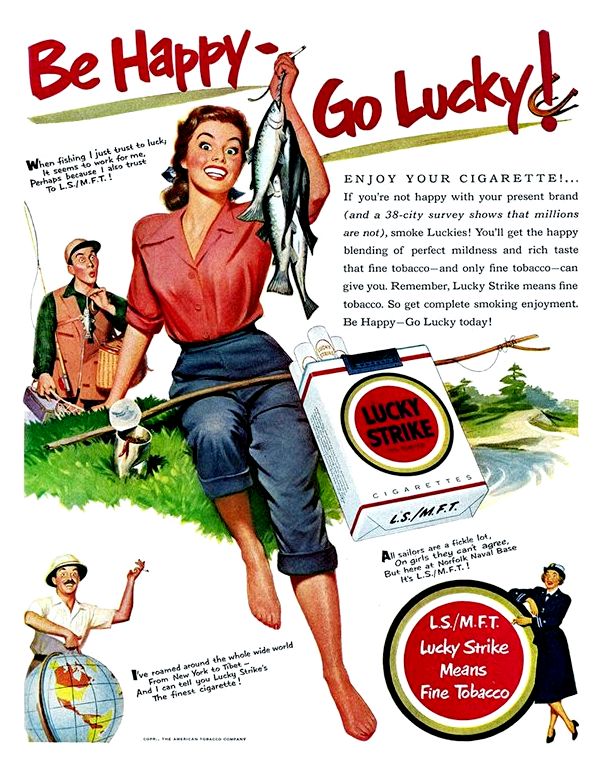 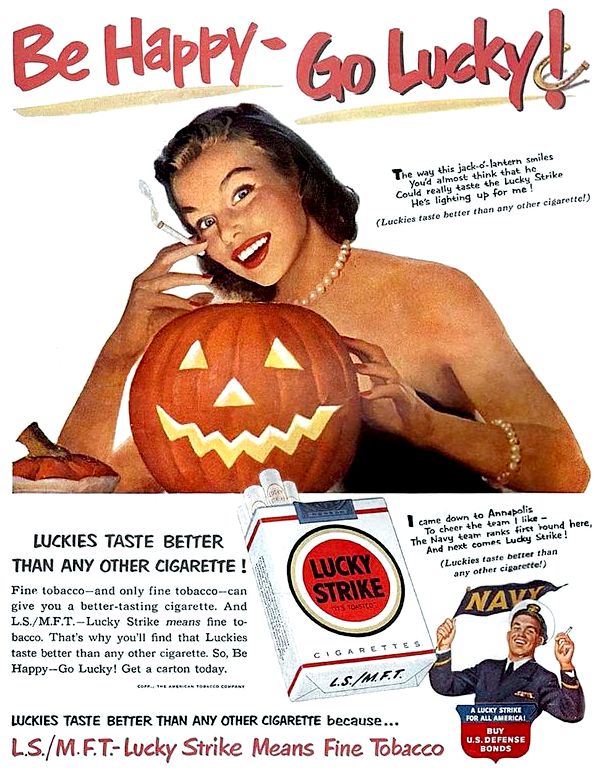 1951 — The Great Pumpkin Goes Happy and Lucky with Lucky Strike! 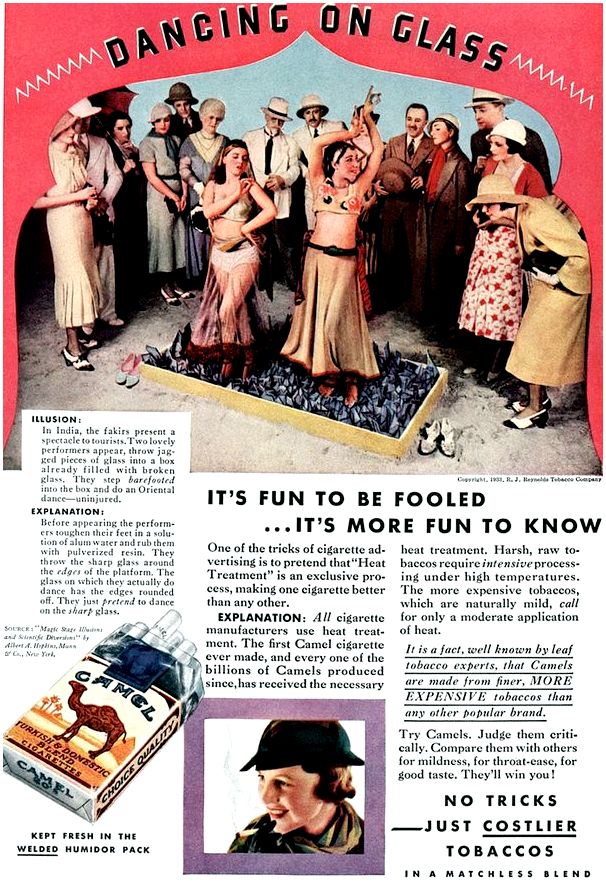 Already in the 1920s, the world knew that «nicotine — the poison.» In the USSR in 1930, began a powerful anti-tobacco campaign:

0
Like this post? Please share to your friends:
Related articles
Interesting 0
Society Former candidate for participation in the presidential election Sergey Ryzhov said that he
Interesting 0
Everything you need to know to start cranking out cash with your PC BY
Interesting 0
«… Air Force Commander Alexander Novikov reported that the two are ready to
Interesting 0
Above the summit crater of the volcano in Alaska Cleveland workers, local observatory
Interesting 0
December 1. Annual capacity is about 180,000 cubic meters of finished products used, including
Interesting 0
Disclose Truth TV introduced a new TV show with the participation of experts: Tarpeya
Categories
SQL - 49 | 0,229 сек. | 11.47 МБ