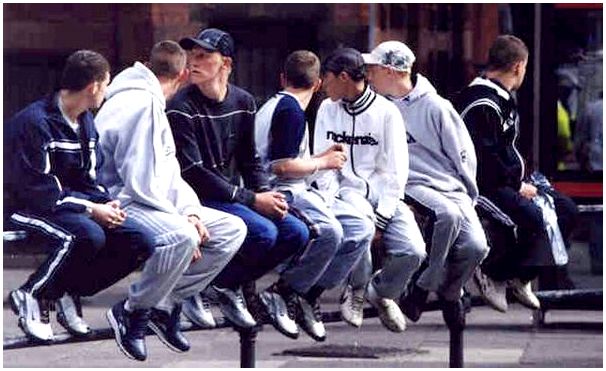 In Britain, more often there are young people who do not have good manners. The conversation is not about juvenile offenders, and of a new subculture — chavah. For several years chavy alienated society that prides itself on its tolerance.

Whom call chavami, and how they managed to achieve exceptional attention to British media? Chavy — is uneducated young white people who are different antisocial and aggressive behavior. Chavy live in poor areas, high-rise buildings in the municipalities. The word «chav» has a lot of versions of its origin, from the Gypsy «chavi», meaning «child» to the name of Chatham.

Sociologists have found that tying chavov with the working class, as was done in the beginning, is not true, because chavy rather neglected work or work only occasionally. The more you learn about chavah, the more they resemble those in Russia called Gopnik. A group of aggressive young people living in different countries, like twins, have the same features and similar habits.

For example, chavy, like Gopnik, besides the fact that violate public order, carefully watch their image. And in this respect is clearly ahead of Russian «street demons» which, no matter how trying to wear tracksuits combined with sharp-nosed shoes, but significant damage is not inflicted company Adidas. But all the famous brand Burberry was hit hard due to the massive counterfeiting, enjoying an exceptional location chavov.

As a result of the occupation of the lower strata of the population elite clothing for the elite and the rich, a huge scandal erupted. Fashion House has taken all possible efforts, but his reputation has been severely damaged. Long-suffering cell, once conquered the world and served as the Burberry trademark is now used only for backings.

The attack on the British chavov world of fashion and glamor did not stop there: they also got their hands on brand name watches Jacob & Co, expensive models of running shoes Nike, Louis Vuitton handbags and designer tracksuits. And, of course, hefty gold ornaments in the form of chains and bracelets are considered to have the same chavov chic, like Gopnik hats with the inscription «RICH».

According to surveys, about 60 per cent of Britons feel at the sight of chavov irritation and disgust. Judging by how successfully on Russian television are entertainment programs and series about how to live «the boys on the block» to show our fellow members of similar subcultures great loyalty.

The British were also not amused, they have a good reason for alarm. In August last year, London, Manchester, Birmingham and other major cities in a wave of unrest, which surveyed 15,000 people, most of them — young people. Property damage caused by riots, estimated at 500 million pounds. The events forced the government to give serious thought to what the cause for the outbreak of aggression. Unfortunately, the report of the expert committee included few comforting facts.

The first thing that drew the attention of the commission — a low level of education of young people in the family, as well as the low level of education in public schools in distressed areas. It turns out that a fifth of British schoolchildren to eleven years barely able to read and write. The second precondition for the emergence of aggression among adolescents and young adults Commission considers the power of the cult of the society of wealth and consumerism, aggressive advertising and marketing. The main purpose in the lives of young Britons become coveted goods, fashionable electronic devices, and other attributes of success and prosperity. The third factor was named unemployment. According to experts, young people who do not receive proper education, can only rely on low-paid and low-status job in a supermarket, call center or fast food eatery. The youth of the poorest neighborhoods have nothing on hopes so easily attached to the mass looting and unrest.

With the first two factors, the government had to agree to immediately take a series of measures to improve the situation, but on the third paragraph of disagreement. Officials believe that the blame is not unemployment, and benefits paid by the State. According to the government, unemployment receive five million able-bodied citizens of Britain, and one and a half million people are in that position nine of the last ten years. «Nearly two million children are growing up in families where no adult is not working — it’s one of the worst in Europe — said UK Minister for Work and Pensions Iain Duncan Smith. — According to some, the problem is the availability of jobs. However, even before the recession began more than four and a half million people were unemployed. «

Against able-bodied people who refuse to work, it was proposed to introduce tough measures: to deprive the weekly unemployment benefit is 65 pounds per week (about $ 100) on the first three months in the case of repeated failure — for six months, and after the third — for three years. It is planned that after 2015, these measures will apply to all who receive the benefits associated with employment. Will the UK government adopted measures are effective, and whether to avoid new turmoil — time will tell, but so far peaceful, law-abiding citizens to advise the police get poorer areas of the party and in every way to avoid encounters with those who are called chavami.

0
Like this post? Please share to your friends:
Related articles
Interesting 0
Society Former candidate for participation in the presidential election Sergey Ryzhov said that he
Interesting 0
Everything you need to know to start cranking out cash with your PC BY
Interesting 0
«… Air Force Commander Alexander Novikov reported that the two are ready to
Interesting 0
Above the summit crater of the volcano in Alaska Cleveland workers, local observatory
Interesting 0
December 1. Annual capacity is about 180,000 cubic meters of finished products used, including
Interesting 0
Disclose Truth TV introduced a new TV show with the participation of experts: Tarpeya
Categories
SQL - 49 | 0,201 сек. | 11.43 МБ