Wall Street Crash of 1929 that resulted in the Great Depression, has become the most significant economic disaster in the industrial world. By 1931, the shares were worth only 20% of the nominal value of 1929, industrial production fell by half, one in four was unemployed. By 1935, half of U.S. banks and companies have been devastated. Even the «Ford Motor Company», the largest employer in the country, closed its offices. Millions roamed the country in search of at least some work pobirayas and stealing. «Northern Pacific Railway» estimated the number thrown out of the wagons vagrants in 683,000 people per year! In this era of broken dreams and empty pockets and flourished one of the nastiest forms of entertainment — dance marathons have become for some way to escape from their suffering, watching other people, but for others — a means of livelihood. 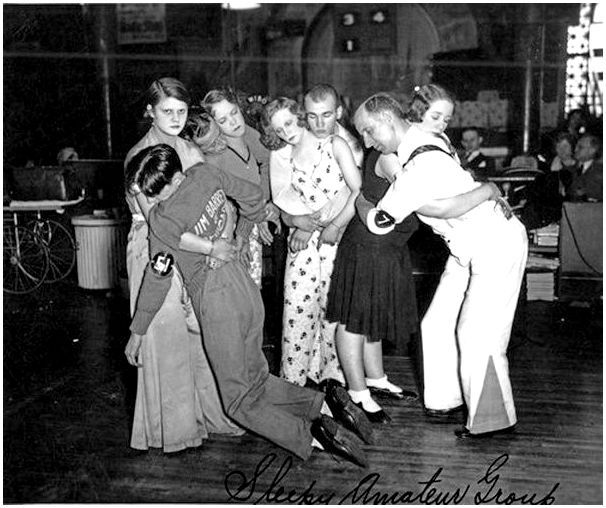 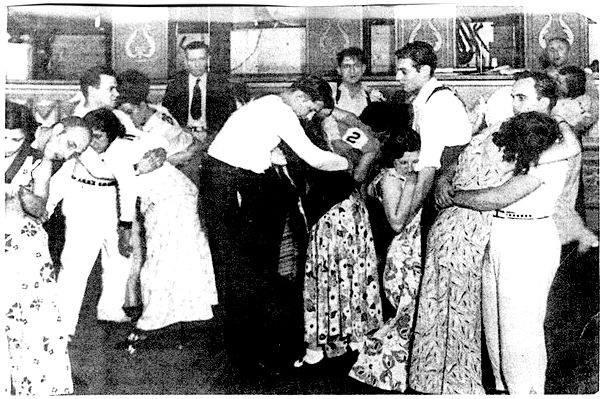 1. Dance marathons, «nightclub poor man,» as they were called, emerged in the early 1920s as an innocent hobby, along with contests for the largest number of pies eaten. The first formal dance marathon can be considered «Audubon Ballroom Marathon», which began March 30, 1923 in New York. There also has been installed and the first record — Alma Cummings danced 27 hours. 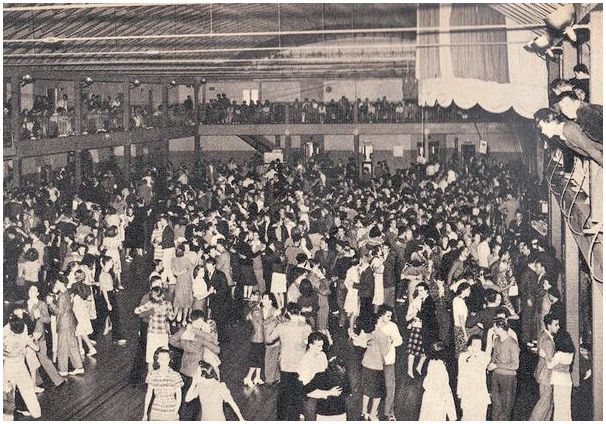 2. By the beginning of the 1930s dance marathons have become a very profitable business. There is something strangely fascinating and attractive in observing people on the brink — this love to the painful agony and played organizers. Marathons around the stern of a lot of people — doctors and nurses, waiters, musicians, and bouncers.

3. For many participants in the marathon victory meant the fulfillment of a dream — the prizes ranged from 1 to 5000 dollars, which was a small state (the average salary in the country was 1,368 dollars per year). But most involved just for a roof over their heads and food, as well as to get medical care, which they themselves could not afford. Many shuttled across the country from one marathon to another, thus ensuring its existence. Some also participated in marathons in the hope that the «talent scouts» will notice them and offered a contract. But as luck units — for example, June Howick, attracted the attention of Hollywood agents «West Palm Beach Marathon» in 1934, where she danced 3600 hours of almost non-stop. 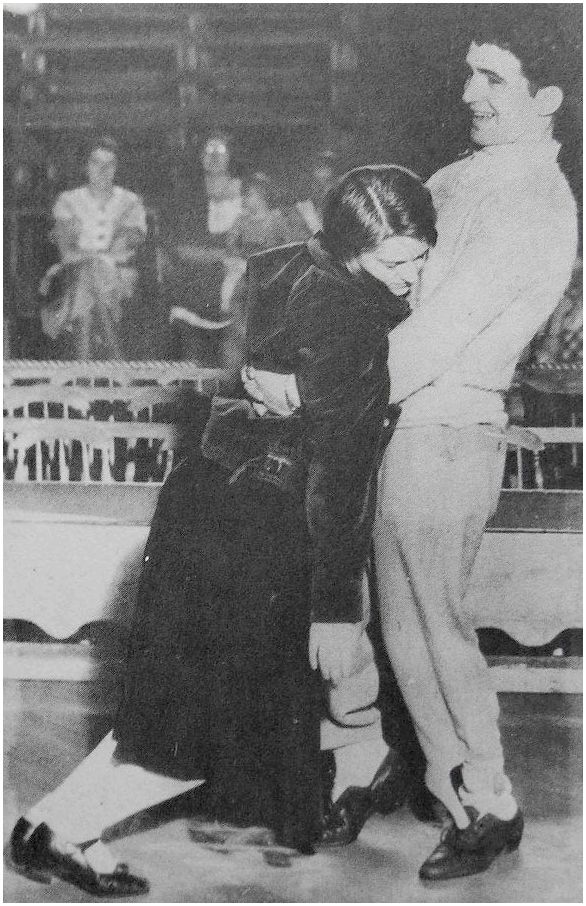 4. Marathons are never-ending, they lasted for weeks or months, you had to dance around the clock. During the first hundred hours of the participants are usually allowed to rest 15 minutes every two hours, was sometimes also included a two-hour sleep. The next one hundred hours afforded 15 minutes every three hours, and so on. Even have had dancing — with food carts rolled out right on the dance floor. Success is seeking someone who could stay on the longest legs and hold myself partner, the dance itself was not important — you can just mark time. On some marathons allowed to change partners, if your own could no longer move his feet. 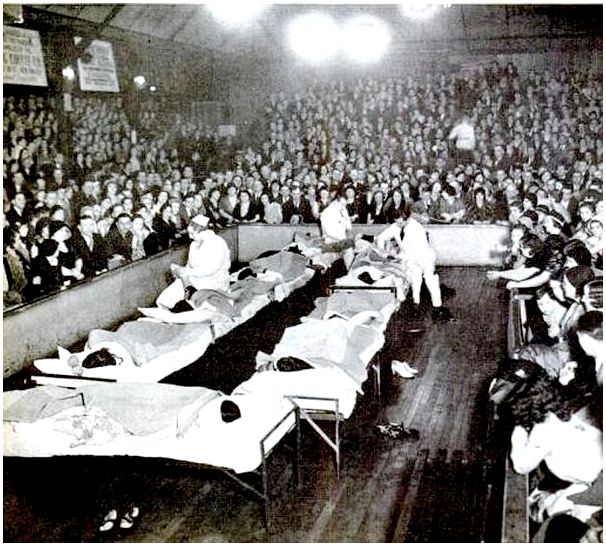 5. A special role in the dance marathons belonged to the steward (Master of Ceremony, MC). His main task was to entertain the audience, coming up with new tasks for the contestants. The most common variant was the so called «derby», when, after several hundred hours of dancing, the participants already on the brink of physical and emotional exhaustion, had to run along the tracks painted on the floor. Was also distributed to one in which every two hours included some specific tune, and everyone had to dance in this style — or they screen out. A good manager must have had nerves of steel and a certain amount of butchery — this «position» gave birth to a fine actors, for example, Reda Skelton, and rather odious characters like Lord Buckley. 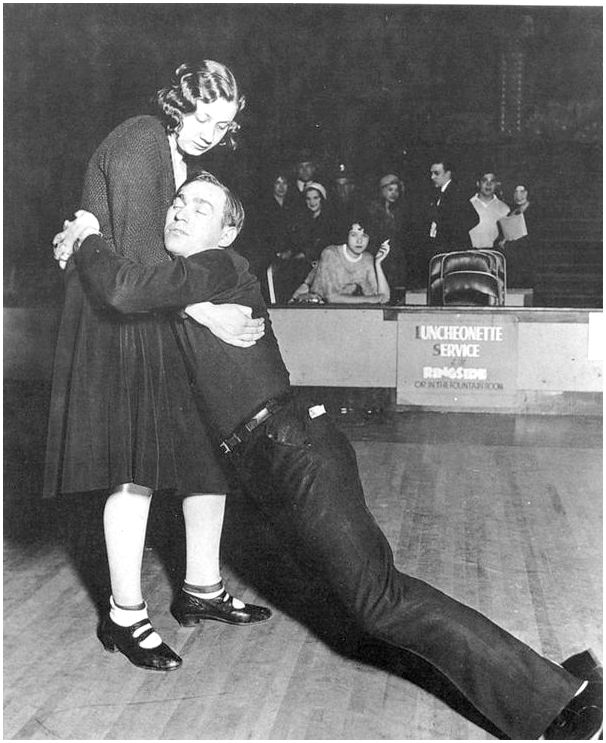 6. The audience stands up to grind out (the admission price was relatively low — from 10 to 25 cents), the audience usually chose «pets» and rooting for them — in general, the atmosphere was like a football match. Dance marathons were the same kind of entertainment, as well as musicals — they are allowed to escape their own worries. 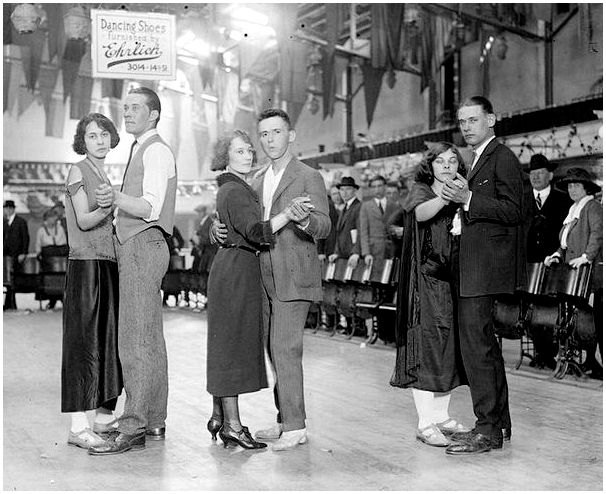 7. Often, the organizers hired a bogus couples who had to start a fight on the dance floor — additional (and often expected) entertainment to the public. Many Americans went to the marathon is to look at women’s fight. In addition to the participants could request to sing a song commissioned by the public (of course, without stopping to dance.) 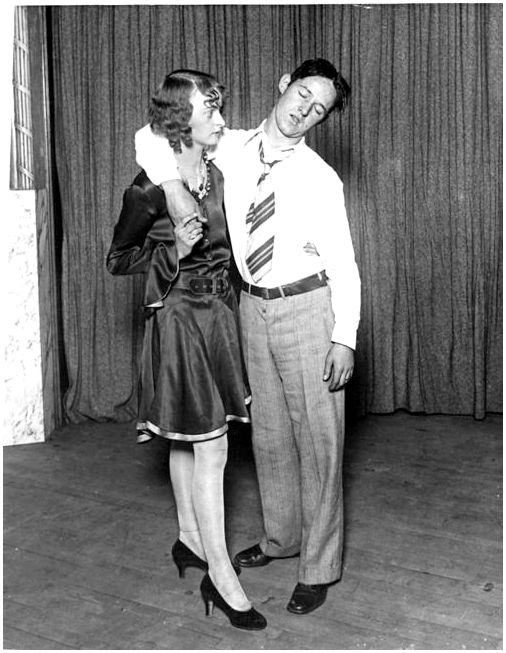 8. The organizers welcomed the wedding partners (and this happened quite frequently), as it was an additional attraction for the public — in such cases, the organizers paid for the bride dress, rings, and a priest or a representative of the City Hall, which are combined to not cease dancing couple on the dance floor. 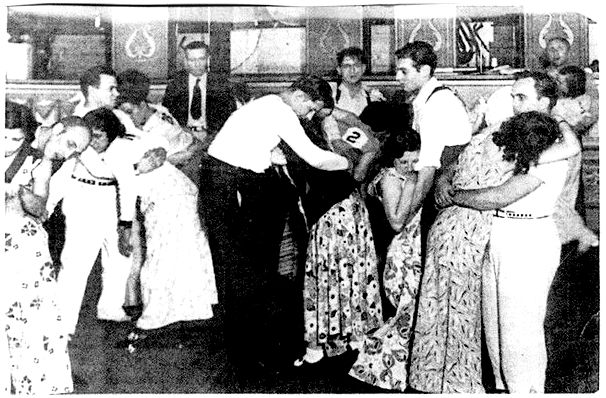 9. Several participants in marathons really died on the dance floor, but that did not stop any participants or spectators. Most dancers begin to hallucinate, which is also entertaining the audience — what could be more fun than watching a man chasing around the floor for the imaginary dogs? An even greater number of dancers died after marathons, long-term lack of sleep taking its toll and people fell into a coma, and because they were too poor to someone cared about them, they are simply out of this coma did not come out. 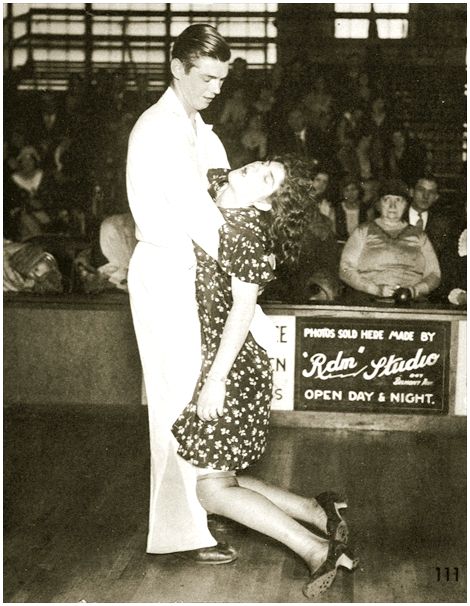 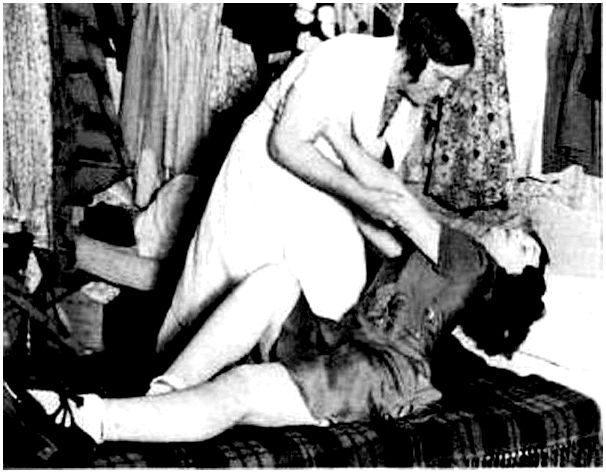 11. By the end of the 1930s dance marathons have become really bloody business, and have been banned in most states. But despite all the restrictions, they continued to hold up to the U.S. entry into World War II.

12. The only film currently showing horror and barbarism dance marathons (and indeed the only film on this subject) is «They Shoot Horses, Don’t They?» («They Shoot Horses»), Sydney Pollack, filmed in 1969. Highly recommended for viewing, even though it is much more relaxed version of the book tough Horace McCoy, written in 1935. 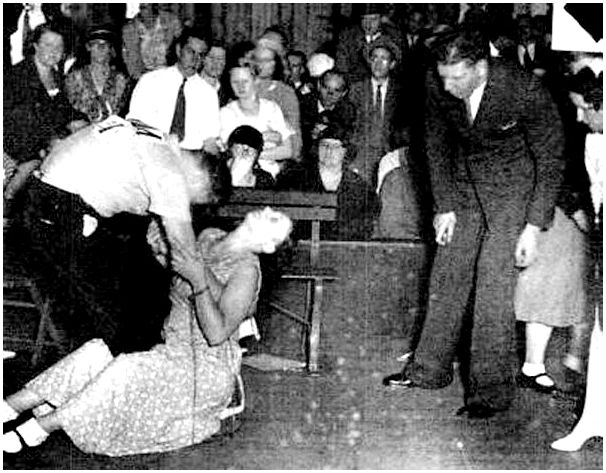 13. Now there are attempts to revive the dance marathons — in a limited time frame (up to — day), and with noble goals (such as a dance marathon, held in February 2002, the University of Idaho in favor of the «Red Cross»). Only creeps’s an idea: Dance Marathon 1920 is also only lasted for two days …

0
Like this post? Please share to your friends:
Related articles
Interesting 0
Society Former candidate for participation in the presidential election Sergey Ryzhov said that he
Interesting 0
Everything you need to know to start cranking out cash with your PC BY
Interesting 0
«… Air Force Commander Alexander Novikov reported that the two are ready to
Interesting 0
Above the summit crater of the volcano in Alaska Cleveland workers, local observatory
Interesting 0
December 1. Annual capacity is about 180,000 cubic meters of finished products used, including
Interesting 0
Disclose Truth TV introduced a new TV show with the participation of experts: Tarpeya
Categories
SQL - 43 | 0,789 сек. | 11.5 МБ