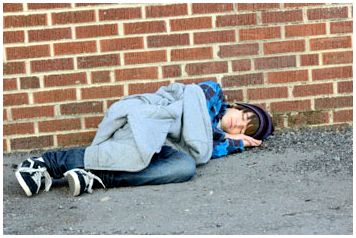 The U.S. Department of Education released the official statistics: the number of homeless children in the United States reached nearly 1 million people. True, it is only those who attend educational institutions. By the way, even five years ago, homeless children and adolescents was 57% less.

How do I find the officials, most of the officially registered homeless minors living in special shelters, cheap hotels, train stations, as well as churches and hospitals. Some were allowed under the roof of the familiar. Many of these children are using drugs and become victims of sexual crimes. Some of them had sex for food, clothing or shelter.

The program is long-term homeless, known as the McKinley-Vento Act, calls for public schools to take these children to school. The report of the Department of Education refers only to those who are registered in the educational institutions. But in general, the homeless children in the country can be much more.

Georgia was the traditional «leader» of the U.S. in the number of street children. There’s a children’s home, if not on the streets is more than 45 thousand children and teenagers. One-third of that number accounted for Atlanta.

From one year to the deteriorating situation in other states. According to a report published in June, Kentucky and Utah in the number of homeless has increased by 47% in West Virginia — by 38%, Mississippi — 35%. In Michigan, where unemployment has reached a particularly high level, each county reports a problem.

«The problems of lack of affordable housing for many families still have not been resolved, and about 1 million children paying the price for it,» — said Maria Foskarinis, the head of the National Centre for the Protection of the homeless. In addition, each U.S. citizen has a constitutional right to a safe, affordable and decent housing.

The growing number of homeless people in 2010-2011 was marked in 44 states, even in small towns. The school campus Frederick Maryland number of students who do not have permanent residence in the past seven years has tripled.

According to Zoya Carson, coordinator of the program «School education for the homeless» families who find themselves on the street, once considered middle class. But the economic downturn has contributed — the well-being of families has fallen, and the current difficult situation has an impact on the performance of children.

«When you go to sleep in a temporary hotel, the last thing you will think this is homework,» — she said.

An example of the town of Frederick — not the only one. Trend can be seen in rich neighborhoods of Virginia, and in the poor areas of Detroit. In one of the most respectable counties of Virginia — County Feyrfoks — public schools visited 2.5 million children without homes. This figure is 10 times higher than 15 years ago.

The situation is aggravated by the fact that the civil society organizations that are trying to help solve the problem, desperately short of funds.

It seems that with the approaching Christmas holidays, a huge number of children in the U.S. will have nowhere to go. They will have to be left to themselves, waiting for better times.

0
Like this post? Please share to your friends:
Related articles
Interesting 0
Society Former candidate for participation in the presidential election Sergey Ryzhov said that he
Interesting 0
Everything you need to know to start cranking out cash with your PC BY
Interesting 0
«… Air Force Commander Alexander Novikov reported that the two are ready to
Interesting 0
Above the summit crater of the volcano in Alaska Cleveland workers, local observatory
Interesting 0
December 1. Annual capacity is about 180,000 cubic meters of finished products used, including
Interesting 0
Disclose Truth TV introduced a new TV show with the participation of experts: Tarpeya
Categories
SQL - 47 | 0,374 сек. | 10.85 МБ