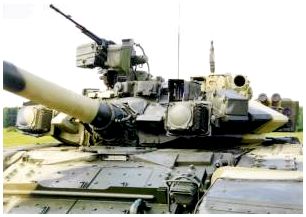 In the last couple of years at exhibitions armored Russian tanks began to appear, equipped complex optoelectronic active protection «Blind-1» in the latest configuration. First differences were seen outside: from the tower of propane tanks refreshed several modules «Curtains-1», which was a prerequisite for the respective issues. As soon as it turned out, the lack of prerequisite was the modernization of the electrical units active protection system. During the renovation of the complex has changed the composition of its equipment and property or to become better, or remained the same.

The composition of the latest versions of «Curtains-1» instead of station opto-electronic countermeasure (SOEP) TSHU-1-7, used in the past, comes TSHU station-1-7M. Under additional lettered title hides a large amount of work carried out by the system designer — Special Design Bureau «Zenit» (Zelenograd). Establishment of the station was planned to start at Zelenograd Production Association «Plant Stella.» System TSHU-1-7M was created a few years back, but then the announcements about it affected only a narrow circle of professionals and individuals interested in armored vehicles. At the same time at different exhibitions SKB «Zenit» spread marketing booklet describing the newest station counter. A few days reverse this booklet again, «went into circulation» after the publication in a professional blog A. Hlopotova.

In the process of modernization of the station TSHU-1-7 endured configuration only technical nature. The principle of the act remains the same: when it detects laser illumination station includes infrared spotlights that prevent anti-tank weapons lock on the tank. In addition, the complex «Blind-1» can hide behind the smoke zaavesyu tank, but similar methods of protection are assigned to its other elements. As part of the refreshed SOEP as before, there are two spotlights placed on the front of the tower. But the number of other parts of the plant compared with TSHU-1-7 significantly reduced.

In the base station except 2-blocks with spotlights were two modulators MTSHU-1-7 (located in armored boxes on the side of floodlights), two filters FTSHU-1-7 (next to modulators) and a remote control PTSHU-1-7 — a total of seven parts. After the modernization in SOEP TSHU-1-7M were only three blocks: two modules OTSHU-1-7M with recessed spotlights and modulators, also remote control PTSHU-1-7. All the necessary equipment has been collected in existing buildings remaining modules. Such modifications, first led to the downsizing station. Three of its modulus in the general difficulties weigh 72 kilograms (95.4 kg in SOEP TSHU-1-7). In addition, four times decreased the total length of cables needed and eight times the number of connectors on the tank hull. Last nuance modernization tangibly increased the reliability of the station.

Developers SOEP TSHU-7M-1 not only changed the assembly parts of the system, and improved the equipment. Thus, the working voltage range increased from 18-32 volts to 26-28,5 V. In addition, it was possible in 20 times to reduce the readiness of the station. Now turn on the station before moving to the current modulation mode is just three seconds, then the equipment can operate in combat mode. In marketing prospectus noted that a significant decrease in time readiness criteria allows you to include real battle station only after the discovery of radiation, not unmasking himself to his radiation projectors operating in standby mode.

After upgrading the station opto-electronic countermeasure kept all the extra features previously available. TSHU-1-7M as before can highlight the area and goals in the infrared spectrum, providing monitoring the situation and pointing guns at the target. During such custom work backlight mode allows for approximately a third of the reduced visibility of the tank. According to the official disk imaging, modernized station TSHU-1-7M has a huge 70% efficiency in comparison with the basic model. Price station with all this remains the same.

By reducing the weight and reduce the number of blocks brand new station can be installed not only on the languid armor. In a marketing brochure cited photos infantry fighting vehicle BMP-3, the tower of which there were two relevant boxes with infrared illuminators. Also in the marketing materials claimed that SOEP TSHU-1-7M tested on several types of vehicles: tanks T-72, T-80 and T-90, also on the BMP-3. In all cases, it was argued, the station showed their abilities to protect equipment from different controlled antitank weapons.

Marketing prospectus, published several years ago, claimed that the station opto-electronic countermeasures TSHU-1-7M go on mass production in 2010. Clear data on this subject are available, as well as information about the number of armored vehicles filled with the newest station. Perhaps the full establishment of new stations and has not begun due to the cessation of purchases of T-90 is equipped with an old TSHU-1-7. On the current state of the project TSHU 7M-1-clear just what these stations are installed on the demo swatches tanks participating in various exhibitions.

0
Like this post? Please share to your friends:
Related articles
Interesting 0
Society Former candidate for participation in the presidential election Sergey Ryzhov said that he
Interesting 0
Everything you need to know to start cranking out cash with your PC BY
Interesting 0
«… Air Force Commander Alexander Novikov reported that the two are ready to
Interesting 0
Above the summit crater of the volcano in Alaska Cleveland workers, local observatory
Interesting 0
December 1. Annual capacity is about 180,000 cubic meters of finished products used, including
Interesting 0
Disclose Truth TV introduced a new TV show with the participation of experts: Tarpeya
Categories
SQL - 56 | 0,422 сек. | 11.49 МБ