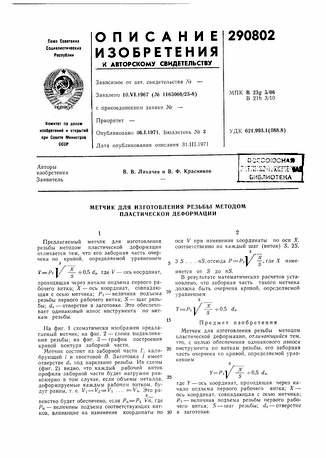 Wrapping — processing of metals and other materials by surface plastic deformation using the tool rolls (rollers, gears recuperator, dies) with a corresponding thread or another profile.

Wrapping as a method for the plastic deformation of the metal has more than 150 years. The ground equipment designed for cold rolling of external threads on the bolts for fixing railway sleepers, used flat dies.

Theoretically, threads and profiles can be dashed off at any plastically deformable material. However, the stability of the rolling process, the implementation of the requirements for quality, precision and strength of rolled products, providing cost-effective tool durability, reliability and performance of the equipment determine the necessary requirements for the material properties of the workpiece.

Increasing demands on manufacturing precision screw profiles are associated with the need to improve the functional reliability of threaded connections with expanding the automation of assembly plants that use threaded parts.

Forecasting and classification of defects arising during the thread rolling — one of the basic elements of modern production technology fasteners, allowing to provide the required quality.

When the thread rolling cylindrical workpiece outer diameter approximately equal to the average diameter of the thread, rotate between the working surfaces of the tool having a predetermined profile. Threaded tool with profile crests penetrate into the workpiece surface and form a depression therein, and the extruded metal is moved in the radial direction, forming thread ridges on the workpiece.

When rolling the threads in the process of plastic deformation changes the physical and mechanical properties of the surface layer of metal. Formed hardening, increases the hardness and strength appear residual compressive stress with a favorable distribution of the cross section of parts modified shape and crystal orientation (texture fibrous), is the process of formation of carbides blocking dislocation shifts and other changes. The result of these reactions increases the resistance of the surface layer of plastic deformation and fracture significantly increases the fatigue strength of parts.

In the process of rolling is continuously relative sliding metal workpiece relative to the working surface of the tool. For this reason, the thread obtained by plastic deformation, have higher grade of surface roughness profile than the roughness of the thread profile, obtained by grinding.

For threaded fasteners profile to apply a variety of threading tools: flat thread rolling dies, video clip and movie segment. Construction threading tools are also varied and depend on the type and manufacturer of the instrument.

The flat plates used, as a rule, three work areas: fence area, the workpiece is captured and pre-roll; calibrating zone, providing the production of the final geometric dimensions of the thread; Area relief, without allowing the workpiece sticking release of threading tools.

The thread rolling rollers and roller segments may not be available on a strict separation of work spaces.

Wrapping thread accompanied forming the surface layer preform, whereby the first step is obtained oval cross-section; in a second step of forming thread originating in the gauge of the tool, it takes the shape of a circle.

When used as a tool for video clips or video segment eliminate the roundness on final rezboobrazuyuschey surface.

Modes of rolling and the degree of filling of the circuit have a decisive influence on the formation of internal and surface defects rolls of thread.

Superficial defects are inevitable in practice associated rolling thread associated with the mechanics of the process. It is known that in thread rolling may occur peeling, flaking, peeling, cracking, tearing or metal surface layers can be formed, surface defects called sunsets folds stratifications, burrs, etc., which, depending on the location and depth can influence the static and cyclic strength of the threaded connection.

Conditions of formation of thread is a major contributor to the formation of surface defects associated with the mechanics of the process rolling. Thread profile is formed, usually by multiple and successive copying tool profile (movable and fixed dies, rollers and roller segments).

Extrude the profile is due to the redistribution of elementary volumes of metal blanks, workers displaced by the turns of threading tools. The surface of the extruded thread is in contact with one working surface, and every half-turn part of another instrument.

Symmetric deformation may lead to a defect in the top of the full profile thread. If each cycle preform body deformation tool profile peak is shifted to a new path by the value a, then the occurrence of defects at any desired position of the thread profile.

The actual process of thread rolling symmetry breaking metal deformation may occur in the following cases:

— due to incorrect adjustment of threading tools, that is the instrument with the wrong offset thread pitch;

— because of the low quality of manufacturing threading tools both on the thread pitch and the shape and the profile angle turns;

— as a result of rolling the full profile turns filling threading tools;

Correct adjustment of the machine, especially the installation of threading tools for runout and step violates the symmetry of the deformation of the metal due to the cycle paths turns instruments. This gives rise to the most abundant defects, called sunsets, folds, layers, etc. Significantly, only the rolling treatment to a greater or lesser extent, contributes to the manifestation of the contrast.

Practice has shown that the threading tools, which has error at an elevation angle of wires or step, regardless of the degree of filling of the tool contour, forms the surface defects in a variety of folds.

This is because with each cycle forming thread crest of one threading tools of the pair is shifted relative to the other.

As a result of rolling the thread in the completed circuit occurs within the surface of the metal layers in the axial direction, which leads to an interruption of the fibers and the appearance of surface defects such layers at the base of the threads.

These defects occur and the elimination of any reasons that cause asymmetric deformation of the metal in the process of thread.

Thus, the main causes of the formation of surface defects associated with the mechanics of rolling process are mismatching paths of wires tools on the workpiece surface, disturbing the symmetry of the deformation of the metal, and a filled roll forming circuit working tool turns, which leads to axial displacement of surface layers of metal.

Perekatka and folds on the lateral surfaces of the thread and the inside diameter of the thread occur in most cases because the setting thread rolling tool does not provide the same punch tool parts in the surface of the workpiece.

This defect occurs as using flat dies, and when forming the thread using rollers and roller segments.

Consequently, a pre-knurled thread profile of the tool is subjected to lateral displacement of another part of the tool.

In the process of thread rolling like defect can be constantly repeated, as appearing on the sides of the thread spiral perekatka extends up to the radius of the base.

The emergence of such a defect is due to the following reasons:

— different angles of the threads on the applicable threading tools;

Perekatka, in other words the formation of creases on the sides and on the basis of the thread profile, reduces its fatigue strength. Consequently, such defects occurring to threaded joints can not only be normalized field tolerances.

One of the most important conditions for quality assurance in the thread rolling is the right choice of rolling modes: force, speed and feed rate. These parameters are largely dependent on the size of the thread rolls and rolls of the mechanical properties of the material.

Accuracy and quality rolled thread time-dependent rolling — of radial and circumferential speed of the feed rate of the tool.

With increased speed and feed rate observed peeling and delamination even thread of the body parts in mechanical tests.

The reasons for the formation of surface defects are not related to the mechanics of the process of plastic deformation in the rolling of the thread, it is advisable to allocate a special group. First of all, it is damaging the threads formed under external influence during the manufacturing process.

Such defects are formed by chipping crest threading tools. Minor chipping significantly increases the surface roughness of the knurled cavities of the thread, they form a large critical surface defects.

Mechanical damage when ingested can nip the workpiece and threading tools of various solid particles (fine chips and abrasive al.), Which may be in emulsion or on the surface of the workpiece or tool.

Scratches, nicks and other imperfections tend to form as a result of collision parts by falling from a high speed in the packaging process.

Attention should be paid to surface defects present at the workpiece although in a modified form (due to deformation of the metal during rolling), they will inevitably remain on the thread of the finished product.

If major defects on the surface of the workpiece, such as punching cracks, hairline, sunsets, etc., High-quality production of the thread may be impossible. From the above it can be concluded that the main factors influencing the quality of the product during the thread rolling are:

1. The quality of the material used;

2. The quality of the workpiece for rolling thread;

3. The quality of the used threading tools;

5. Selection of the optimal mode of thread rolling, depending on the parameters used in material and workmanship workpiece;

6. The technical condition of the equipment.

0
Like this post? Please share to your friends:
Related articles
Interesting 0
Society Former candidate for participation in the presidential election Sergey Ryzhov said that he
Interesting 0
Everything you need to know to start cranking out cash with your PC BY
Interesting 0
«… Air Force Commander Alexander Novikov reported that the two are ready to
Interesting 0
Above the summit crater of the volcano in Alaska Cleveland workers, local observatory
Interesting 0
December 1. Annual capacity is about 180,000 cubic meters of finished products used, including
Interesting 0
Disclose Truth TV introduced a new TV show with the participation of experts: Tarpeya
Categories
SQL - 47 | 0,185 сек. | 10.88 МБ