Kailash — mountain about 6700 meters high, from which originate the four main rivers of Tibet, India and Nepal (the Indus, the Sutlej, Brahmaputra and Karnali). 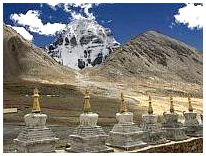 Mount Kailash — currently still considered unconquered. Holy Mount Kailash could be called Olympus Central Asia. According to Hindu tradition, the Kailasa inhabits one of the gods included, along with Brahma and Vishnu, the supreme triad («Trimurti») — the terrible Shiva, his dance «Tandava» maintain order in the universe. In addition to the abode of Shiva and Buddha, on top of Mount Kailash, is the entrance to the mysterious land of Shambhala. If we go around the mountain on a certain route, you can receive forgiveness of sins, if 13 times — do not go to hell for the next five hundred rebirths — and get right around Kailash different route … do it 108 times, weed out of the circle of rebirth and attain the Buddha’s enlightenment. A small, but very important thing — if you do all of this for our own ambitions — nothing will avenge you and Kailas.

«In Tibetan texts written that Shambhala is a spiritual country and is located in the north-west of Kailash. Hard for me to discuss this topic from a scientific point of view. But I can quite positively say that Kailash complex is directly related to life on Earth, and when we did schematic map «City of the Gods», consisting of pyramids and stone mirrors, we were very surprised — the scheme was similar to the spatial structure of DNA molecules. » (C) Professor Ernst Muldashev

The mysterious city of the gods

It was a long time ago. Sons possessed amazing power of the five elements with which to build a giant city. It is there, according to the Eastern religions, was the North Pole to the Flood. In many eastern countries Mount Kailash is considered the holiest place on Earth. It and the surrounding mountain Kailash were constructed using the powerful forces of the five elements: air, water, earth, wind and fire.

In Tibet this power feel like psychic energy of the universe as something inaccessible and unattainable for understanding the human mind! And then at the height of 5680 meters is the famous «Valley of Death», to pass through it only sacred road. ‘ll Go off the road — you get into range of the tantric powers. A stone mirrors so change the course of time to the people who get there, that within a few years they became old.

These unique stone structures have a smooth or concave surface. The greatest mystery to science — the ability to change the stone mirrors Kailash time. «Time» — the energy, the ability to concentrate and spread. Example of the Tibetan temporal mirrors — the mysterious death of four climbers who went on an expedition with this sacred road, and after returning to the one-year old and died. Medicine was not able to establish the cause of death. All stone mirrors have different shapes and sizes. One of them which has a height of 800m, called «Stone Palace of Happiness». Believe that it is a place of transition in other parallel worlds. Largest «mirror» — flat slopes of the western and northern sides of the main pyramid Kailash. they have a clear concave shape. The height of each of them — 1800m. Scientists argue that such large planes have the ability to transfer energy, which is stored in the pyramids themselves, connecting it with the flow of other energy forces of the universe.

Mirrors Kailash and the Bible

The fact that the concave mirror can «stretch» or «compress» the time, two thousand years ago on the island of Patmos was John the Divine revelation. But when he heard and gave us the parable of the encrypted information and Muldashev only saw and described the stone mirrors Tibet, academician Kozyrev made a mirror that the passage of time … changes. He thought no abstract concept but a concrete energy capable or concentrate (then time «contracts»), or distributed (if time «stretched»). The most striking is the fact that people go inside the mirror Kozyrev, clearly felt dizziness, fear, were transferred to his childhood. This is because they are literally immersed in the energy, called time. And under the influence of this energy feels changes in themselves and in the perception of the world. In this mirror Kozyrev did not exceed a height of two to three meters. A stone mirrors Kailash, according Muldasheva, almost the size of two-kilometer mountain. It is, of course, the largest stone mirrors. Placed in a certain way in relation to each other, they produce the desired effect of «time machine» that can carry not only dedicated to the different time period, but also in other worlds. By the way, and the pyramids of Egypt were once covered with tiles sparkling in the sun, too, in fact, mirrors. I must say that in the past almost all the buildings that have a pyramidal shape, were equipped with multiple mirrors. Far our ancestors knew a lot about dealing with this unique energy, which we call time. Incidentally, the famous seer and prophet Edgar Cayce XX century saw on the bottom of the ocean in the Bermuda triangle huge mirror, which, according to him, can distort the temporary space.

In the individual spatial mirror

In his travels to Tibet Muldashev heard the tragic story of one of the expedition. Four Russian climbers did not follow advice of Tibetan lamas and climbed the mountain, considered sacred, like the holy mountain of Kailash. And then just a year old and dead! The fact that they became subject to the mirror and stone are its concave side, dramatically compress time. According to the logic of the story, it turns out that all of humanity is turned in the same manner with respect to the great spatial mirror — our sky! So, we all have to age dramatically, if the sky is destined to curl up in a scroll, to «kill the bad times.» According to some versions, so that we are faster than him over. Otherwise, we are threatened with destruction by our own aggressiveness and lack of spirituality. That is why it became necessary time «shrink.» That is why we feel that the time is now just flies. But remember that time — is energy, and energy all its own. Consequently, we can achieve a paradoxical state where the planet itself quickly «runs» of the era and centuries, and some people with younger. This is possible if you build yourself mentally individual mirror. It is, of course, should not be direct, and concave, so that you can accommodate up to «compress» his hand, and with that in relation to you and convex time «stretches».

0
Like this post? Please share to your friends:
Related articles
Interesting 0
Society Former candidate for participation in the presidential election Sergey Ryzhov said that he
Interesting 0
Everything you need to know to start cranking out cash with your PC BY
Interesting 0
«… Air Force Commander Alexander Novikov reported that the two are ready to
Interesting 0
Above the summit crater of the volcano in Alaska Cleveland workers, local observatory
Interesting 0
December 1. Annual capacity is about 180,000 cubic meters of finished products used, including
Interesting 0
Disclose Truth TV introduced a new TV show with the participation of experts: Tarpeya
Categories
SQL - 49 | 0,169 сек. | 11.43 МБ